Is a VoIP Phone System Right For Your Business? 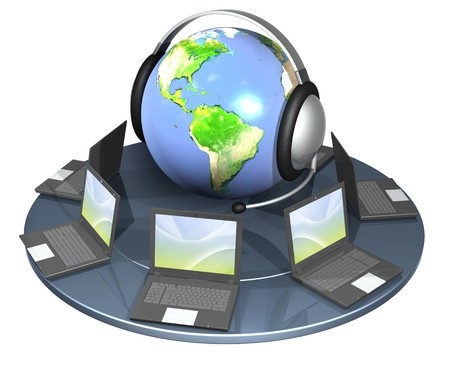 If you’ve never heard of VoIP, get ready to change the way you think about long-distance phone calls. VoIP, or Voice over Internet Protocol, is a method for taking analog audio signals, like the kind you hear when you talk on the phone, and turning them into digital data that can be transmitted over the Internet.

How is this useful? VoIP can turn a standard Internet connection into a way to place free phone calls.

VoIP is a revolutionary technology that has the potential to completely redefine the world’s phone systems. VoIP providers like Vonage have already been around for a while and are growing steadily. Major carriers like AT&T are already setting up VoIP calling plans in several markets around the United States, and the FCC is looking seriously at the potential ramifications of VoIP service.

Because of the bandwidth efficiency and low costs that VoIP technology can provide, businesses are migrating from traditional copper-wire telephone systems to VoIP systems to reduce their monthly phone costs.

VoIP solutions aimed at businesses have evolved into unified communications services that treat all communications—phone calls, faxes, voice mail, e-mail, web conferences, and more—as discrete units that can all be delivered via any means and to any handset, including cellphones.

Two kinds of competitors are competing in this space: one set is focused on VoIP for medium to large enterprises, while another is targeting the small-to-medium business (SMB) market.

VoIP allows both voice and data communications to be run over a single network, which can significantly reduce infrastructure costs for businesses.  VoIP devices have simple, intuitive user interfaces, so users can often make simple system configuration changes. Dual-mode phones enable users to continue their conversations as they move between an outside cellular service and an internal Wi-Fi network, so that it is no longer necessary to carry both a desktop phone and a cellphone. Maintenance becomes simpler as there are fewer devices to oversee.

VoIP phone service will more than likely one day replace the traditional phone system entirely.  Techno Advantage is working on bringing this technology to it’s clients as a service option.  Ask a Techno Pro how VoIP phone systems can help your business today!